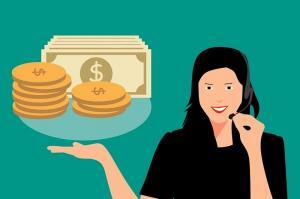 Collecting outstanding debt isn’t an easy process. If a consumer has allowed their obligations to go into delinquency they’re usually either experiencing significant financial difficulty, they’re grossly irresponsible, or they have no intention of paying. None of these situations are amenable to fast debt recovery.

Companies will generally try to collect on their outstanding accounts internally before passing their most egregious cases on to an external debt collection agency. But how wise is this? Are collection agencies effective enough to warrant their fees?

Absolutely. Collection agencies are experts in debt recovery. The most effective agencies have perfected a proven process for their agents to follow that dramatically increases the chances of collecting a debt. Even after their contingency fees, a collection agency is typically able to recover a lot more money than the client can do by themself. Plus they take away all the troubles that your staff has to undergo while chasing your unpaid bills.

Not only should companies trust collection agencies to handle their debt recovery, but they should also pass the debt on to the agency sooner than they do in many cases. That’s because debt collection success is a factor of time, skill, and reputation, all of which favor collection agencies. 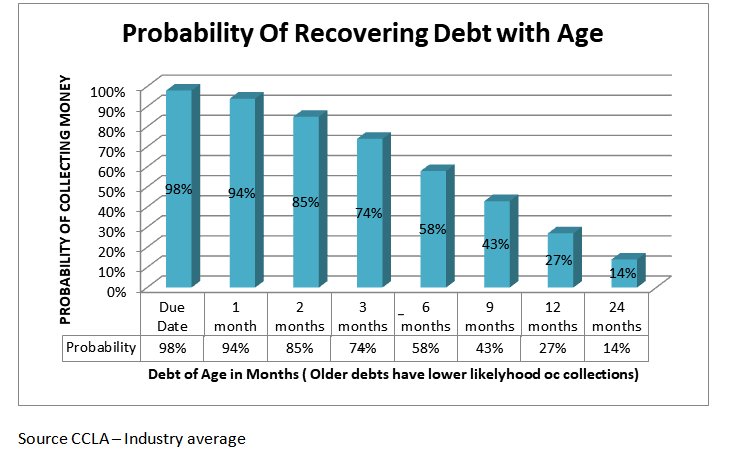 The longer an account remains delinquent, the less likely it is to be recoverable. An outstanding balance that’s one month old has a 94% chance of being collected. By two months that drops to 85%. It falls to 74% collectible at three months, and by six months, only 58% of debts remain viable. At a year, there’s only a 27% chance of recovering the debt.

These percentages assume skilled debt collectors with modern collection tools at their disposal, like those found at agencies. Internal collections departments fare even worse. It’s better not to wait too long to pass your outstanding debts on to a professional.

Debt collection is their business, after all. It’s how they make a living. This means collection agencies have just as much of an incentive to collect your debt as you do. It’s rare to find this sort of win-win relationship in business.

Agencies offer their agents rigorous training and access to advanced tools like skip tracing and bankruptcy scrub to improve the accuracy of their collections.

Skip tracing techniques allow agents to track down debtors that have “skipped” out on their debts and are no longer reachable. Bankruptcy scrubs alert agents when a bankruptcy filing occurs so they can move quickly to avail themselves of the proceedings as efficiently as possible.

These and other techniques aren’t always available to internal collections teams, reducing the effectiveness of their efforts.

Debtors Are More Likely to Pay A Collection Agency

When a debt passes from the original creditor to a collection agency, this escalation often makes debtors pay attention. There’s an implied threat when an agency gets involved that doesn’t exist with the original creditor. People that are having financial difficulties, or are just irresponsible will often string their creditor along. When a collection agency begins calling, the debt feels more palpable.

Collection agencies also know how to speak with debtors to motivate payment. That doesn’t mean they threaten them, because they generally don’t. Instead, they use a sophisticated arsenal of psychological tactics to push people toward payment.

As a third-party agent, they can have conversations with debtors that are difficult for the original creditors. They can act as an intermediary or position themselves as a helpful friend instead of an adversary. These are all benefits not afforded to the original creditor.

Every state has laws governing how debts can be collected. Most creditors are unaware of these. And because they aren’t consistent, businesses that operate in multiple locations may have to follow different regulations depending on the customer.

Collection agencies are intimately familiar with all of these legal frameworks and operate within them daily. Using an agency can shield you from running afoul of these laws.

Collection Agencies Are The Most Effective Option

Quality agencies enjoy a higher success rate than original creditors, are more affordable than lawyers and legal proceedings, and use diplomatic techniques that allow companies to preserve their relationships with their customers.

You should undoubtedly attempt initial collection efforts, but once your delinquent accounts seem unrecoverable, you should trust a collection agency. Their fees might seem high, but keeping 70% of a debt you likely wouldn’t have collected otherwise is a net positive transaction. And if you don’t receive anything, the service costs you nothing. As stated earlier, it’s a win-win.