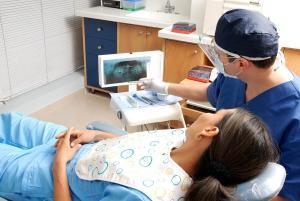 Oral health is a field ripe with misconceptions and “common wisdom” which is wrong more frequently than it’s right. In an effort to help correct some of this bad information we present ten common dental myths and explain the truth behind them.

This is partially true, which is why the belief is so widely held. But in fact, sugar doesn’t cause cavities directly. Instead, it’s the bacteria that feed on the sugar you eat that is responsible for tooth decay.

That means eating sugary foods is fine for your teeth as long as you’re brushing and flossing regularly to prevent plaque and keep the bacteria in your mouth in check.

#2: The Harder You Brush, The Better

Many people think that brushing is more effective the harder you press the bristles into your teeth. But this isn’t true when it comes to oral health. In fact, brushing too hard can be damaging.

When you press too firmly you wear at the gums that support the roots of your teeth. Over time this can lead to gum recession and can damage tooth enamel. The reason this extra force isn’t necessary is two-fold.

Brushing removes the soft plaque on your teeth, the bacterial film that builds up throughout the day. It doesn’t take a lot of force to disrupt the structure and wash it away. Plaque that has already hardened into tartar, however, is extremely strong, and no amount of brushing, no matter how hard, will remove it. So go easy on your teeth.

#3: You Only Need to Visit the Dentist When Your Teeth Hurt

Many of us only see the doctor when we’re sick, so the logic goes that we only need to see the dentist when our teeth hurt. But both of these are misconceptions for the same reason.

Preventative health maintenance is just as important as seeing a doctor when there are problems. We should get regular check-ups even when we feel fine to make sure there aren’t developing problems, and we need to see the dentist on a regular basis, too, even if our teeth feel fine.

#4: You Shouldn’t Brush or Floss If Your Gums Are Bleeding

This is because it’s the bacteria that builds on your teeth and under the gumline that’s responsible for weakening the gums and causing them to bleed. Brushing and flossing remove that bacteria, leading to healthier gums. They may bleed a few times, but the bleeding will stop if you keep up your cleaning regimen.

It’s true that the teeth themselves are expendable, but they serve as placeholders for a child’s future, permanent teeth. The spacing and alignment of baby teeth help guide the growth of adult teeth, so if a child gets cavities in their baby teeth it can affect the growth pattern of the teeth that replace them.

Sometimes yes, but not always. Teeth can discolor because of health issues, but they can also be stained by smoking and by certain foods and beverages. Stained or yellowish teeth do not automatically mean there is a health issue.

The more pernicious problem with this belief is the idea that using teeth whiteners will lead to healthier teeth. Whitening your teeth will only make them whiter. It won’t fix underlying issues.

#7: Diet Soda Won’t Hurt Your Teeth Because it Doesn’t Have Sugar

This is wrong in two ways. We learned earlier that sugar itself isn’t a problem for teeth, which means regular soda isn’t any worse for your teeth than diet soda. And both can damage your teeth because soda is extremely acidic.

Both regular and diet soda contain carbonic acid, which is created by the carbonation process, as well as small amounts of citric acid and phosphoric acid. This acid content can degrade tooth enamel as well as cause tooth sensitivity.

#8: You Should Brush Your Teeth After Every Meal

Many people assume that the reason we brush our teeth is to clean away food particles. For this reason, they think it’s best to brush each time they eat.

This isn’t the case. Brushing is intended to remove soft plaque, and interrupt the process which hardens it into tartar. As long as we brush twice a day, once in the morning and once at night, we’re sufficiently cleaning our teeth. Brushing after every meal is unnecessary and can be damaging to tooth enamel.

#9: If You Eat After Brushing At Night You Need to Brush Again

This is wrong for the same reason you don’t need to brush after every meal. Food particles don’t cause tooth decay. They only serve as food for the bacteria in the plaque that accumulates on your teeth.

When you brush, you break up this plaque and rinse it away. Eating after brushing does little to affect your teeth because the bacteria that would feed on it aren’t present in sufficient numbers. So if you have a midnight snack, don’t worry about brushing again.

#10: Once A Tooth Has a Crown or a Filling It Can’t Get a Cavity

Not only can you still get a cavity in these teeth, in some cases a cavity is more likely. That’s because plaque and tartar can form around the margin where the crown or filling meets the tooth. If this is allowed to fester decay can begin. It’s important to care for all of your teeth, even those with fillings or crowns.

All misconceptions aside, as long as your brushing your teeth twice a day, flossing, and getting regular, professional dental cleanings and checkups, you’re giving your teeth the best chance they can get for a long and healthy life.

If you are looking for a dental collection agency to address your accounts receivable: Contact us